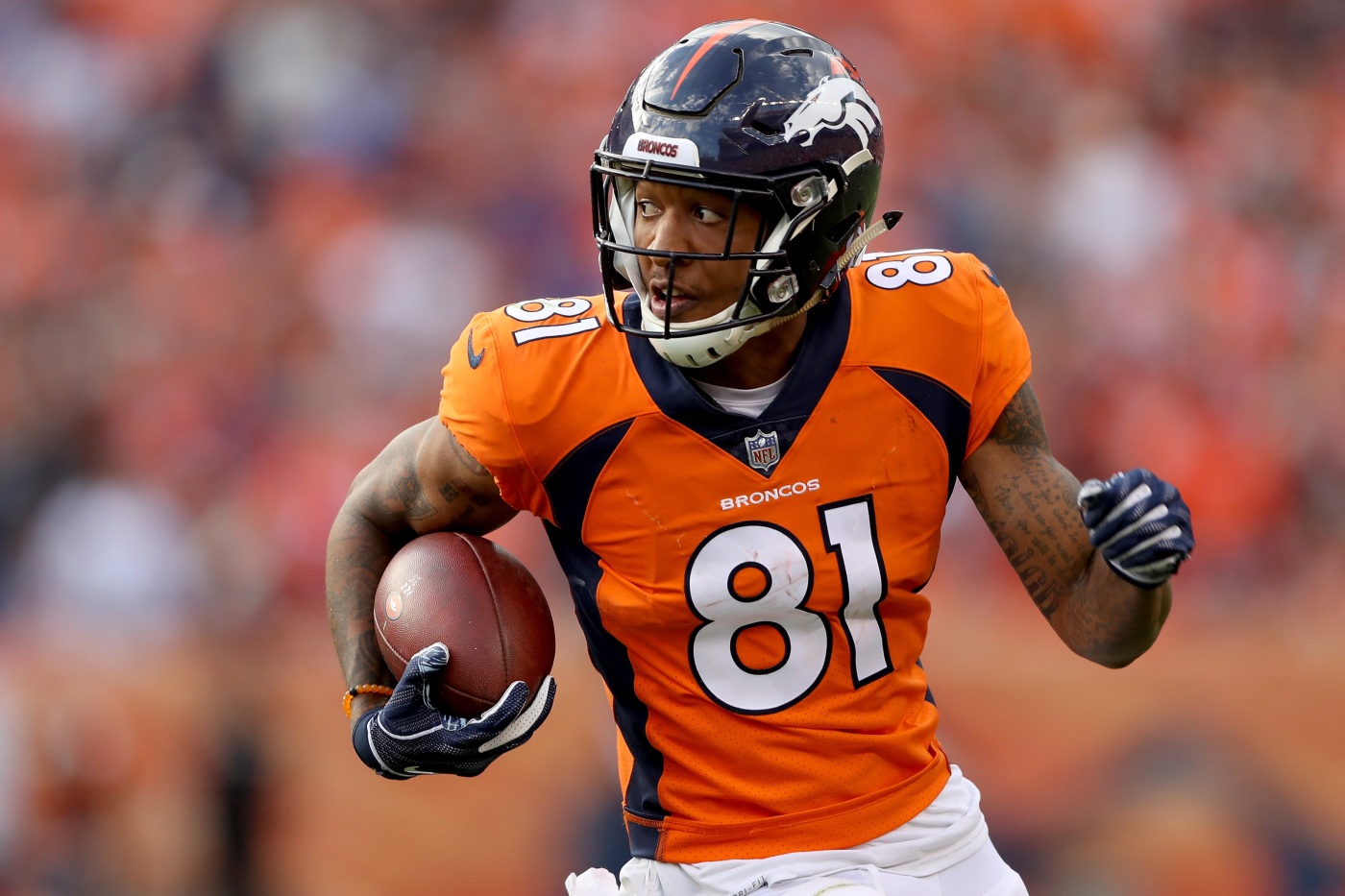 It’s been a good few weeks as the waiver wire hasn’t been hit too much. Especially compared to earlier this season when we lost Saquon Barkley for the season, and Christian McCaffrey for multiple weeks.

Last week’s big blow was Dak Prescott, but most teams have already found a replacement. However, if you are still scrambling, then you came to the right place.

This week, we have lost Miles Sanders for at least week 7 and Zach Ertz for the next 3-4 weeks. Ertz hasn’t been exactly the TE1 we thought we were drafting this summer, but that’s okay because we’re here to get you back on track – so let’s go!

As usual all players are owned in 60% or less of CBS leagues.

I had Carr listed here last week, even going into a bye. He has been playing as a low-end QB1 and has scored over 20 fantasy points every game outside of week 1. He’s got the Buccaneers, Browns and Chargers over the next three weeks.

It is time folks! Our co-founder Ben Morgan is celebrating this as we speak! Ryan Fitzpatrick has been good for Miami, helping them get to a 3-3 start, and just one game out of first place in the AFC East. This offense needed spark. Yes, Fitzpatrick has done well to this point, but if you have been following Tua since his college days like I have, you will be adding him where you can. Should be a fun game (hopefully!!) in week 10 when Tua and the Dolphins take on Herbert and the Chargers. Super excited for this as he should be no worse than a high-end QB2.

He was dropped by many last week due to the bye, causing him to fall below the 60% threshold. He looked good with his 15 attempts for 71 yards, but also was active in the passing game catching 5 balls for 23 yards. He outshined rookie Joshua Kelley and it didn’t even look like a competition. He is my top add this week over everyone that is available and the Chargers are taking on the Jacksonville Jaguars who just gave up 123 total yards and 2 touchdowns to rookie D’Andre Swift.

Miles Sanders left with a knee injury, and from the sounds of it, it sounds bad. He appears to be out at least this week as the Eagles take on the Giants Thursday night. Scott has the opportunity to be a top-20 back with Sanders out.

Once Le’Veon Bell got released, La’Mical Perine was second in carries behind the ageless Frank Gore. Adam Gase sucks at coaching and may be fired by the time you read this, he just sucks ass. Running backs are hard to come across and Gore is not the answer. Hopefully, the next coach sees what they have in Perine as there may be some untapped potential there. Just remember though, it is the New York Jets.

Last week I had J.D. McKissic in the “check to see if available” part of the waiver wire and this week he makes the cut. McKissic has had six receptions in weeks 4 and 5 and he followed it up with 7 in week 6. He also had 8 rushing attempts for another 48 yards. In PPR, as long as he can keep this up, he should be able to serve as no worse than a flex option.

Check to see if available: Giovani Bernard (20% owned, Mixon could be limited or out) Jerick McKinnon (82% owned, Raheem Mostert injury looks to be going to IR)

I had some doubt in Travis Fulgham despite his 10/152/1 game last week. However, he did follow it up with 6/75/1 against the Baltimore Ravens, and he gets the New York Giants on Thursday night, so let’s see if he can make it four games in a row with a touchdown.

A familiar face here again as he finished last week with 6 catches for 143 yards and a touchdown. He was second in targets last week with nine as the Jaguars were trailing the whole game against the Lions. He hasn’t seen less than five targets in a single game this season, and I feel like he has solidified himself as a WR3/flex going forward. He has the Chargers next week followed by his bye.

Two games over 100 yards and two weeks of targets of seven and eight. For you non-math majors out there and that’s 15 targets over two games. I was thinking it was Jerry Jeudy who was going to take the WR1 spot, but he has an issues of drops, or as this past week showed, not getting targeted as much as we would like. That’s what Patrick is. The target hog. He should hold WR3/flex going forward.

Mike Williams had a game week 5 where he lit up the Saints’ defense for five receptions, 109 yards and two touchdowns. The chemistry that he is building with rookie quarterback Justin Herbert should continue to grow moving forward.

Philip Rivers is trying every dog-gone thing he can to get Burton the ball. Gee-willy did he get it to him. Was that good for a Philip Rivers impression? It sucks that he had such a solid game, just to go into a bye, but he is worth rostering.

A name that we haven’t heard in a while made a comeback this week. The tight end position is a tough one to play and I hate it. The nice thing is if you need a fill-in tight end because you lost Zach Ertz, Thomas wouldn’t be a bad plug-n-play tight end as he get the Dallas Cowboys in week 7.

This is a week early, but now is the time to get him while no one is thinking of him. He is eligible to come off IR in week 8 and he gets the Dallas Cowboys. Let’s not forget he had 17 targets going into week 3, and that was with a healthy Zach Ertz. Stash him if you can.