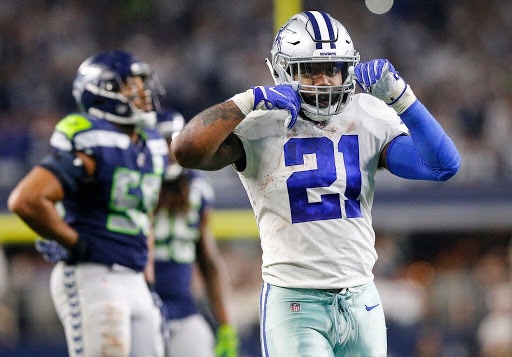 Highlights – My cash game picks smashed. I hit the nuts with Josh Jacobs ($6,800) and Josh Allen ($6,500). Jamison Crowder ($5,200) had the targets we expected and I just happened get lucky with him taking a short pass to the house. Logan Thomas ($2,800) was a steal at his price. New Orleans Saints ($2,400) came up pretty clutch after picking off Tom Brady’s dusty ass twice and taking one of those to the house.

Lowlights – I ignored @loadedboxDJ like an idiot and should have built around Aaron Rodgers and Davante Adams. He was right. My tournament lineup was complete trash. The Cardinals vs. 49ers game did not turn out how I expected. DeSean Jackson ($4,900) did nothing good either. What an asshole (kidding).

We all learned last week how much of a liability the secondary of the Minnesota Vikings really is. Rivers passed the ball 46 times in a pretty slow game against Jacksonville. The Colts are known to be an incredible rushing team but Phil’s fantasy value could actually be propped up by his running backs. All of the screen plays that were called last Sunday were extremely efficient. T.Y. Hilton and sophomore receiver Parris Campbell both have the ability to take any short slant route for a touchdown. It should not take much effort for this inexpensive QB to return value.

Zeke had his usual workload in week one. He was in on 87.5% of all offensive snaps. The best part of his game last week was the receiving touchdown. This week the Cowboys have one of the highest point totals so I can see plenty of redzone rushing attempts plus more receiving work in a competitive game. High floor + High upside = easy play.

Don’t tell PETA but Derrick Henry literally eats Jaguars.. alive. Tennessee showed once again that it will feed its 2019 rushing champion. Game script will easily be in their favor and he could actually reach the 35 rushing attempt range. Another easy week 2 cash game pick.

[Free Square]… But seriously, most of us on the JT hype train didn’t expect bellcow status to come this early. The stars have aligned. At this price, Taylor should be played in every format.

No wide receiver in the NFL has the floor and upside that Adams has. He was way too cheap last week and is STILL too cheap at his current price. There isn’t much to explain for these high priced elite players. Just build around these core guys for free money.

When wide receivers garner rushing attempts, it shows what their team really thinks of their athleticism. Parris Campbell is, and will continue to be Philip Rivers’ favorite target. He showed that he could get open over and over when playing out of the slot on Sunday against Jacksonville. The funny thing is, this week, the secondary he is against is actually worse than what he faced week one. Expect more offensive competition against them this time so this game could be a shootout. Many splash plays are coming and I foresee Campbell getting more than just the nine targets he saw last week.

The 49ers are going up against what is probably the worst team in the NFL this week. The receiving corps in San Francisco is so depleted that they gave Taylor five targets last week. George Kittle is not expected to practice at all this week after suffering a knee injury during last week’s game against Arizona. I expected Jimmy G to lean on whoever is left to catch passes for him. Taylor should see more targets this week and it will be enough to return value off of his low price.

Here it is ladies and gentleman. Is Herndon the truth?? With Crowder being banged up and having trouble practicing this week, there should be plenty of vacated targets if he is not able to suit up on Sunday against the 49ers. This is the week to prove to all the doubters that he is not a lie and that the hype is real. If Herndon does not step up this week then everything you’ve ever heard about this guy when it comes to the hype is completely false.

The reigning MVP has the most upside AND is playing in the game that has the highest over/under of the week. His team also has the highest implied team point total. All of that because Houston’s defense is very poor and we don’t expect Deshaun Watson to go down without a fight. This game should produce fireworks.

When taking my first look at this slate, I knew the Rodgers/Adams stack would be popular once again. If the Packers end up in the red zone more often this game instead of just having the ability to pass it straight into the endzone, Aaron Jones will have one of his classic multi-touchdown weeks. His ability to catch the ball and run the ball so efficiently gives him an incredible floor but the touchdown upside will make him at least a top-5 RB this week.

[FREE SQUARE]… read above again if still not convinced.

Will Fuller had an amazing target share week 1 against a high-powered Kansas City Chiefs offense. I see no reason for that not to continue this week against Baltimore. We have still yet to see the usual 50+ yard play from Deshaun Watson to Fuller. This week it will happen. Watson will have to keep this game competitive and Fuller should see a boat load of catchable balls. Do not forget who handed us the highest point total out of any NFL player last season. This guy is going to ball out.

Dak Prescott and the Cowboys lacked that splash play ability outside of Ezekiel Elliott taking a long screen to the house. Michael Gallup should have had a long reception but a terrible call brought it back. Watching the ATL/Seattle game last week, we can all tell that the Falcons have a tough time covering receivers down the field. Amari Cooper and CeeDee Lamb will take all of the short and intermediate routes but expect a few big plays out of Gallup. He also played the highest percentage of offensive snaps in week one (95.8%) more than both of his wide receiver teammates.

I absolutely love players that also play on special teams. Diontae Johnson IS the closest thing to Antonio Brown that Big Ben has seen since his departure. We all know JuJu finished with the better fantasy performance because of his two touchdowns, but the targets and snaps that Johnson recorded were very comforting. There is no reason Smith-Schuster should be a whole $2,000 more than Johnson. 10 targets looks very good when you are priced down to $4,500. Roethlisberger finally looked like himself and should be peppering him with targets all throughout Sunday’s game against the Denver Broncos in which Corey Davis performed like a pro bowler.

This guy is an athletic freak. I have been waiting for him to show up and get the reps he deserves. Boykin led all Baltimore receivers in snaps week one AND received multiple redzone targets. Since Marquise Brown seems to be the chalk for tournaments this week, this is an easy pivot. If the targets are consistently there again this week, touchdown upside is there with a player that is sub $4,500.

Mark Andrews is definitely the go-to guy for Lamar. He is completely unlocked this season and should always be stacked with Jackson. Nothing to overthink here.

Chase Young and that Washington defensive line embarassed Philadelphia last week. This week, the best defensive player in the NFL gets to tear up Wentz’s ass and try to top the eight sacks the Football Team laid on him in week one. More pressure equals more chances for sacks and turnovers.

TOURNAMENT GAME STACK OF THE WEEK

Be sure to check out the latest episode of the Loaded Box Podcast as we give our straight up and against the spread picks for each game on the week-two schedule!

One thought on “DraftKings Week 2 Tournament and Cash Game Picks”