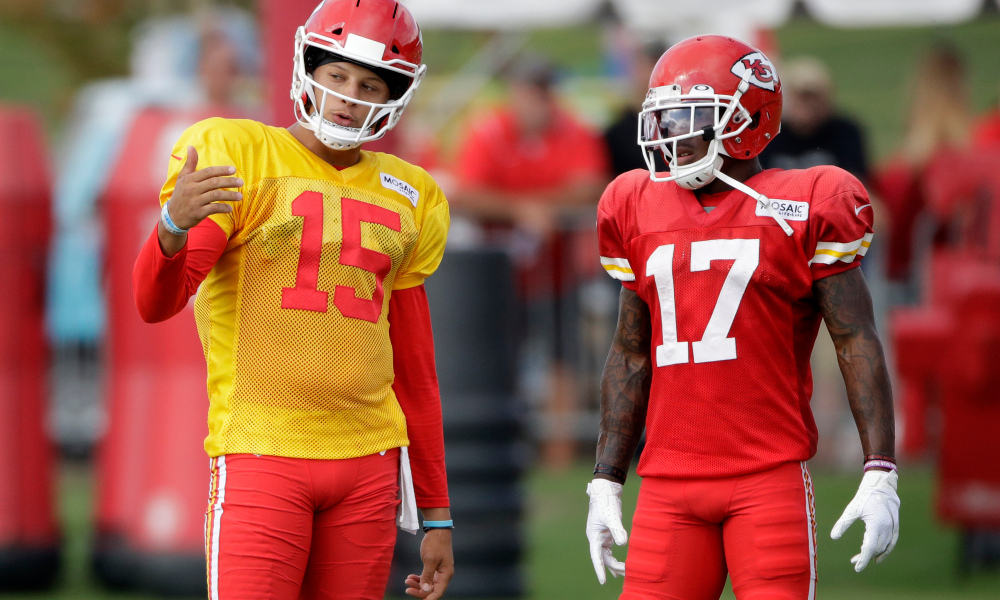 Week 1 was a shining example of when your fling with the sidepiece went exactly as planned.

Four of the five sidepiece players I recommended that you find a way to enter into your starting lineup ended up either scoring a touchdown, or having an outright monster fantasy day.

I’m going to try to stay humble, because as well all know, the sidepiece action can blow up in your face at any time. But for the time being, I’m going to ride the wave and see if I can help you sneak some studs into your starting lineup for a second consecutive week.

Teammate Sammy Watkins was a sidepiece last week, and now that he’s the team’s No. 1 WR with Tyreek Hill shelved, insert Mecole Hardman.

Is Hardman ready to step in and contribute on a week-to-week basis? Probably not. But with how Kansas City spreads around the ball, and with his blazing downfield speed, I could see Hardman getting behind the Raiders’ secondary for a long touchdown that you’re not going to want to miss out on as a fantasy owner.

Hardman feels like my riskiest sidepiece this week simply based on his lack of experience in the pro game. However, my gut feeling has me sticking Hardman into as many of my fantasy lineups this week as possible.

I’m not typically an advocate for using players on what I believe to be bad offenses, but I’ll make an exception for a running back that I believe will get the job done via the passing game.

With Derrius Guice undergoing meniscus surgery, and Adrian Peterson being a healthy scratch last week, the Redskins appear to have faith in Chris Thompson to be an important piece for this backfield.

Peterson will likely lead the team in carries this week, but I expect the Cowboys to be in control of this game forcing Washington to pass the ball while playing from behind. So if you’re in a half or full PPR league, Thompson could be in line for a nice volume day, hopefully resulting near 100 total yards and a touchdown.

You don’t have to look far to find better than Thompson at running back this week, but if your typical starter has a tough matchup and you want to get a little risky, considering throwing Thompson a bone.

Here’s another running back that started the season in a crowded backfield, and due to injury, has found himself as the team’s top choice at the position.

Jerick McKinnon was placed on IR before the season started, and now with Tevin Coleman expected to miss a few weeks, Matt Breida finds himself in line for a big workload against a Bengals defense I believe overachieved last week against Seattle.

Raheem Mostert will eat a little bit into Breida’s overall production, but with how tricky it can be to find RB’s that get consistent touches, Breida has turned into a nice option for your starting lineup in Week 2.

Who’s better at the beginning of NFL seasons than John Brown?

The guy put up a team-high seven catches on 10 targets for 123 yards and a touchdown last week against the Jets; and looking back to the start of last season, he posted over 85 receiving yards in three of his first four games while totaling three touchdowns.

Now Brown gets a matchup against a Giants’ defense that just allowed 405 passing yards and four touchdowns to Dak Prescott and the Cowboys.

I’m not trying to say that Josh Allen is going to duplicate what Prescott was able to do, and that Brown is going to have a career game, but he definitely emerged as Allen’s top target and it wouldn’t surprise me to see him flirt with 100 yards and a touchdown.

Make a splash this week. roll the dice with your sidepiece Brown and have a good story to tell your friends Monday morning.

There’s still time before the games start, so check out the latest episode of the Loaded Box Podcast as we get you set for Week 2 of the daily fantasy sports season with our bargains, stacks, must-use players and advice for those FanDuel & DraftKings lineups!