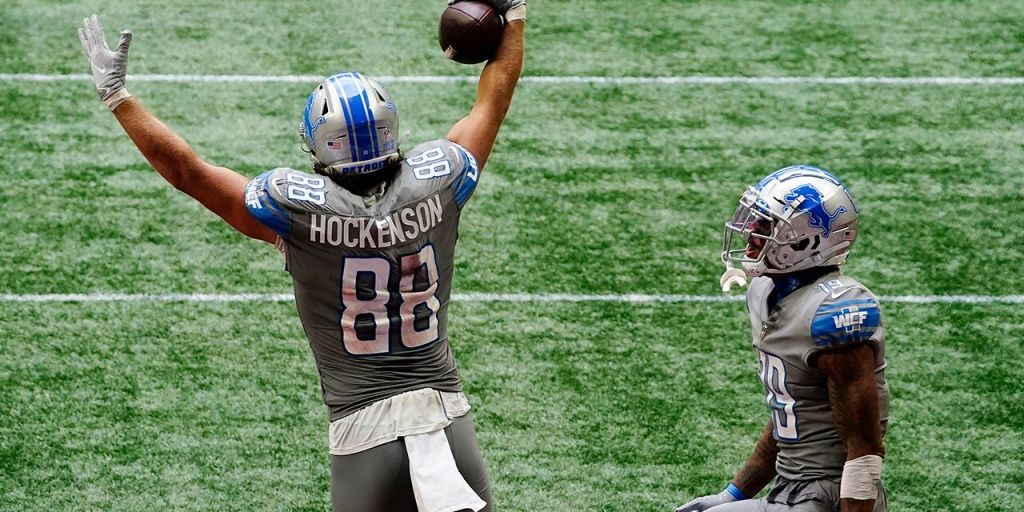 Week 8 was nothing short of a mess…

There were plenty of familiar faces at the top of the points-scored leaderboard, but when the likes of Corey Davis, Gio Bernard, DeeJay Dallas, Zach Moss, Jordan Wilkins and Nyheim Hines all score 19+ fantasy points in the same week, you’re likely going to have some head-to-head fantasy matchups that didn’t go as predicted.

As we move forward, the theme for this week = safe/conservative moves.

Each of the following trade, drop & hold nominations heading into Week 9 aren’t what we’d consider “week winners” but may help solidify your roster as we begin to enter the must-win portion of the fantasy season.

As the fantasy playoffs begin to take shape and teams on the outside-looking-in contemplate a few last-minute, game-changing moves, I’m actually thinking that you’re more likely to see some “lesser-coveted” players being dealt since the teams at the top of the fantasy standings aren’t looking to trade the studs that put them into their current position, and the teams sitting just outside of the playoffs likely don’t have the depth needed to pull off a big-name-player trade.

With that being said, let’s take a look at this week’s conservative approach to trade, drop & hold!

In this particular case, I’m telling you that if you’ve been platooning between tight ends, or if you just lost a player like George Kittle due to injury, see if you can make a move for T.J. Hockenson.

Hockenson has either scored a touchdown or topped 50 receiving yards in every game this season, and is likely to see a bump in usage after Kenny Golladay went down in Week 8 with a hip injury. Golladay has already been ruled out for Week 9 and is considered week-to-week at this point in time.

He led the Lions with 10 targets last week against the Colts, and I’d expect more of the same moving forward as the team’s next opponents include Minnesota, Washington, Carolina and Houston. Also, regardless of who the Lions’ opponent is, they aren’t the type of team that’s going to be blowing other teams out and getting conservative with play calling in the second half of games, so Hockenson is a pretty safe bet to be involved for all four quarters of every game.

Heading into Monday night, Hockenson was the sixth-highest scoring tight end this season, so it may be a bit of a challenge to pry him away from his current owner. However, I noticed that the trend with drafting Hockenson this year was to pair him with another late-round tight end, so the current owner may have a couple of legitimate options at the position and may be willing to part ways with Hockenson if he paired him with the likes of Jonnu Smith, Hayden Hurst or Noah Fant.

Like I mentioned earlier, Hockenson isn’t likely the type of player that’s going to go out there and win you a week, but being able to slot him into the TE position on a weekly basis, rather than platooning guys or playing the waiver wire, may give you some added stability at the position to make a run in the fantasy playoffs.

If you lost Kittle or you simply need reinforcement as the position, start with a call (likely a text, it’s 2020) to your league’s Hockenson owner.

I had some people asking me late last week about using Jimmy Garoppolo against Seattle, and my advice was pretty simple… go ahead and use Garoppolo this week in a very enticing matchup, but if he doesn’t get the job done, never feel comfortable using him again.

Giving him the benefit of the doubt, I understand he’s dealing with a nagging injury that’s preventing him from playing to his full potential and will keep him out multiple weeks, but in the world of redraft fantasy football, you don’t always have the luxury of waiting around to see how things play out.

As of Tuesday afternoon it sounds like he may also be in line to miss a couple of weeks, so at this point in time he’s not even worthy of stashing away on your bench. What would you be saving him for anyways? Even if you’re rostering two mediocre QB’s, are you really going to feel confident selecting your starting quarterback based on matchups after the performance Garoppolo just had against Seattle?

That roster spot may not come in handy this week, but dropping Garoppolo and rostering a backup RB/WR/TE, or even finding a different QB to use in a platoon system, will do you more good in the long run than holding onto Garoppolo.

So that’s where I’m at with Jimmy G. At this point, you can definitely find another starting quarterback that can provide a safer weekly floor, so go ahead and cut ties now.

Holding Phillip Lindsay refers to not dealing him to a league mate that’s looking to land a mid-tier running back in hopes of making a final push at making the playoffs.

At this point in the season it’s going to take an absolute blockbuster deal to land a top-tier running back, so if any deals for running backs are going to be made before the fantasy football trade deadline, it’s much more likely to be a deal involving a RB that’s the caliber of Lindsay.

Lindsay could be a player that others in your league may be targeting for a few different reasons.

First, since returning from injury and Denver’s Week-5 bye, Lindsay has looked like the running back to own for the Broncos as he rushed for over 100 yards on the road against the Patriots, had 79 yards on nine carries against the Chiefs (before leaving midway through the game with a concussion), and added 83 rushing yards and a touchdown on just six carries on Sunday against the Chargers.

The six carries from Week 8 are a bit concerning, but keep in mind that Denver was trailing for the majority of the game and was forced to pass more often than not.

Another reason fantasy owners may be targeting Lindsay is because of the safe floor he provides. We’ve seen so many running backs go down to injury this year, that at this point in time, most fantasy owners are simply looking for a guy that is guaranteed to see around 10 touches and hopefully produce 8-15 fantasy points each week. This is exactly the type of production that Lindsay provides as he averages 11.3 touches and 9.3 fantasy points per game.

Maybe you’re even in a position as a non-Lindsay owner where you can go out and attempt to trade for him if you’re in need of a more consistent body as your RB2/flex, but my advice to fantasy owners currently in the mix for a spot in the playoffs is to hold onto a player like Lindsay.

Sticking with the theme of the article, he’s not the type of player that’s going to go out and win you the week, but he’s definitely a guy that’ll give you solid production and a safe weekly floor (10.1, 7.9 and 15.1 points each of the last three weeks).