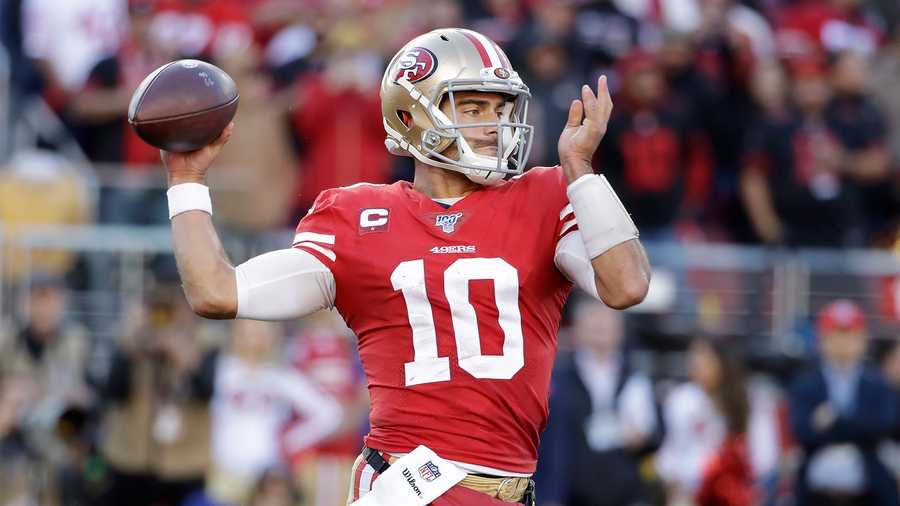 The conversation as of late seems to be around whether or not Jimmy Garoppolo is overrated. Recency bias from how the Super Bowl played out is an obvious factor. Even in the fantasy community the opinions that either prop up his value or diminish his skills as a QB don’t seem to come from narratives that are truly indicative of what really matters.

If you focus purely on what Garoppolo has done and ignore the noise surrounding the typical Kyle Shanahan story lines, you actually see the real potential he has as a fantasy QB.

When looking at Jimmy’s 2019 game log, you can see the lack of passing attempts game by game. Almost half of his games he threw the ball 25 times or less (6 games). A lack of volume will always hinder a QBs ability to produce valuable fantasy numbers.

The game scripts he faced week to week in 2020 was a massive factor. The 49ers facing the 11th-easiest schedule in 2019 and having the number two-ranked DVOA by fantasy outsiders allowed Shanahan to manage the majority of games with his gang of running backs by having them keep the lead/slow down the pace.

Unsustainable defensive efficiency and a second-in-league average run plays per game (31) will come crashing down in 2020. Losing their all-pro DL DeForest Buckner and seeing the fourth-toughest strength of schedule this upcoming year will transform the rushing attempt totals into passing attempts in order to keep each game competitive.

The fourth-hardest strength of schedule is in relation with the winning percentage of each opponent they face. That number is technically not parallel with how difficult the schedule is for Garoppolo. The 49ers are ranked inside the top five for easiest schedule at the fantasy QB position. Competitive games and weak pass defenses will definitely lead to an abundance of fantasy points.

Passing volume is the key to success for Jimmy G in 2020. When you take how efficient he actually was, there is no reason he cannot be a top-10 quarterback.

The only important metric he ended the season outside the top 12 was pass plays per game (#29 in the NFL). He melted faces in other metrics finishing as the #1 most efficient deep-ball passer with a 55.6% completion percentage on balls that traveled more than 20 yards.

Positive regression when it comes to passing attempts is evident. Just getting back to the league average attempts per game will grant him at least 10 more passes each week, but I can see them ending the year top 10 in that category.

San Francisco also trusted him to take care of the ball in the red zone, having 77 red zone pass attempts (#7 in the league) and 27 passing touchdowns. Even with such low overall pass attempts this shows that those red zone attempts can only go up from here.

Other important efficiency metrics Garoppolo showed up in were his true completion percentage (76.7%, #3 in the league) and also his completion percentage when pressured (46.9%, #2 in the league). In 2019, there were only three games where he had to complete more than 26 passes. In each of those games he finished as a top-four fantasy QB; even the 2nd overall just behind Dak Prescott in week 9.

Many people look at the San Fransisco 49ers and think of Shanahan and the success of his running backs. Let’s not forget that when Matt Ryan was the #2 fantasy QB and NFL MVP in 2016, averaging 21.7 points per game, Shanahan was the offensive coordinator for him in Atlanta. I truly believe that there will be a change in script when it comes to 2020 and this offense. Jimmy Garoppolo will become the focal point and finally get the credit and fantasy results he deserves.

Be sure to check out the latest episode of the Loaded Box Podcast as we discuss our top players to avoid candidates for the 2020 fantasy season!