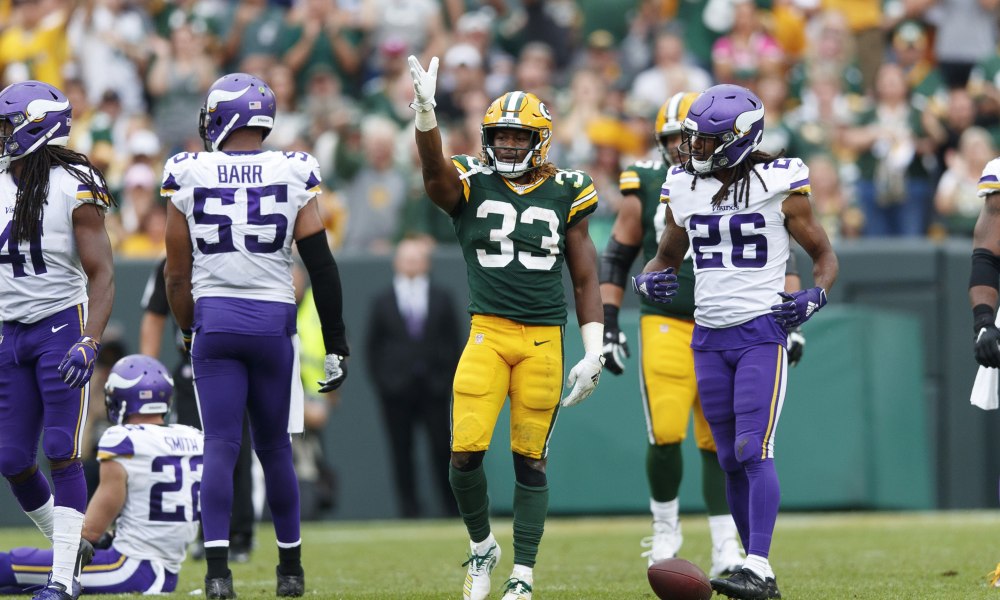 Wow, what an interesting Week 2 it was!

Ben Roethlisberger went out and didn’t cash. C.J Uzomah, LeSean McCoy and the Steelers DST were total busts. On the bright side, though, Devin Singletary did good for his value, Brandin Cooks had a solid outing and Tyrell Williams bailed us all out with a touchdown.

Did you win some money? Did you lose money? Regardless, we need to keep our heads up and move onto Week 3 and see what bargain plays I have in store for you!

Coming off a three-touchdown game (along with three interceptions), Matt Ryan is going to Indianapolis to take on the Colts. It’s another dome game for Ryan and the Falcons, and when I was looking for bargain plays, I first saw Josh Allen ($5,900) and then my eyes opened wide when I saw Ryan for $300 cheaper. This running game is struggling, and the passing game is accelerating. Ryan will get those interceptions under control and should come out on top in Week 3.

If you were like me and many others last week, you either benched Aaron Jones or you didn’t put him in any of your DraftKings lineups. Yeah, I did both of them. I was scared of that Vikings’ defense after week one, but it’s looking like it’s Atlanta’s running game that is struggling more than anything. When a running back gets 27 touches in a game, you have my attention. He should eat again this week as David Montgomery put up a 18/62/1 stat line last week against the Broncos. I see Jones repeating last week’s performance again this week, once again in front of the home crowd.

Like a fine wine, it just gets better with age. That’s what they tell, me but even being almost 35 years old, I still can’t stand wine. The ageless wonder himself just won’t hang them up at the young age of 36! His stats weren’t all that to brag about having 19 carries for 68 yards and a rushing touchdown, but my hat is off to you Frank Gore as you scored your first rushing touchdown since 2017! If Devin Singletary is out, I’m going ahead with Gore. If Singletary is suiting up, I’m still going with Gore. It’s Cincinnati, what more do I need to say?

Raise your hand with me if you think Mike Evans is way too low this week. He still had eight targets last week and others are thinking Chris Godwin ($6,900) is better for more money; be my guest and go ahead and play him. Sure, he’s been targeted two less times than Godwin, but let’s remember, Evans is seeing No. 1 coverage. Jameis Winston should start getting the hang of this offense this week leading to a bounce-back week for Evans; and he should be figured in ALL of your lineups this week.

After receiving 24 targets over the course of the first two weeks, Larry Fitzgerald has been an imagine of his old self and back in the good graces of a competent quarterback in Kyler Murray ($5,800), who is starting to get more comfortable in Kliff Kingsbury’s pass-first approach. Having a wide receiver like Fitzgerald as your safety blanket is perfect, especially when you’re a rookie quarterback. Double-digit targets should be in store again this week.

Coming into the season most “experts” saw D.K. Metcalf as a straight-line runner with no cutting ability. How has that aged? Metcalf is looking better than what everyone expected and that’s with the Seahawks becoming more of a running team. Over two games, Metcalf has not seen less than six targets per game. They have New Orleans coming to town with no Drew Brees at the helm. This could end up benefiting Metcalf as I feel like a lot of people are sleeping on the Saints and they will turn out to be just fine without Brees, causing the Seahawks to come out of their comfort zone leading to more pass attempts. I expect a big game for both Metcalf and Tyler Lockett ($6,200).

Greg Olsen aka Chief Hooper – if you’re like me and watch Stranger Things you know exactly what I mean, check it out if you haven’t. Ol’ reliable is what I like to call him this season because has been targeted nine times both games and put up a solid outing last week against the Tampa Bay Buccaneers. With Cam Newton not looking so good to go this weekend with a foot injury, I have faith in second-year quarterback Kyle Allen ($4,000) to do just fine as they will be heading to Arizona to take on the Cardinals; who have been the worst in the league against tight ends as T.J. Hockenson put up a 6/131/1 stat line in Week 1, followed by Mark Andrews‘ 9/112/1 last week. I expect this trend to continue with Olsen.

Over the first two weeks of the season the Packers’ defense has looked very good as fellow Loaded Box Podcast host, D.J. Premo, predicted they’d be a top-15 defense this past offseason. The Packers’ defense has put up double-digit fantasy points (14 Week 1, 12 Week 2) and now get the Denver Broncos coming to town. I expect Joe Flacco and company to have a hard time in Lambeau, as this defense should eat them up.

Looking for more DFS advice? Be sure to check out the latest episode of the Loaded Box Podcast as we discuss our top daily fantasy sports bargains, stacks, must use/avoid players, and answer listener start/sit questions!