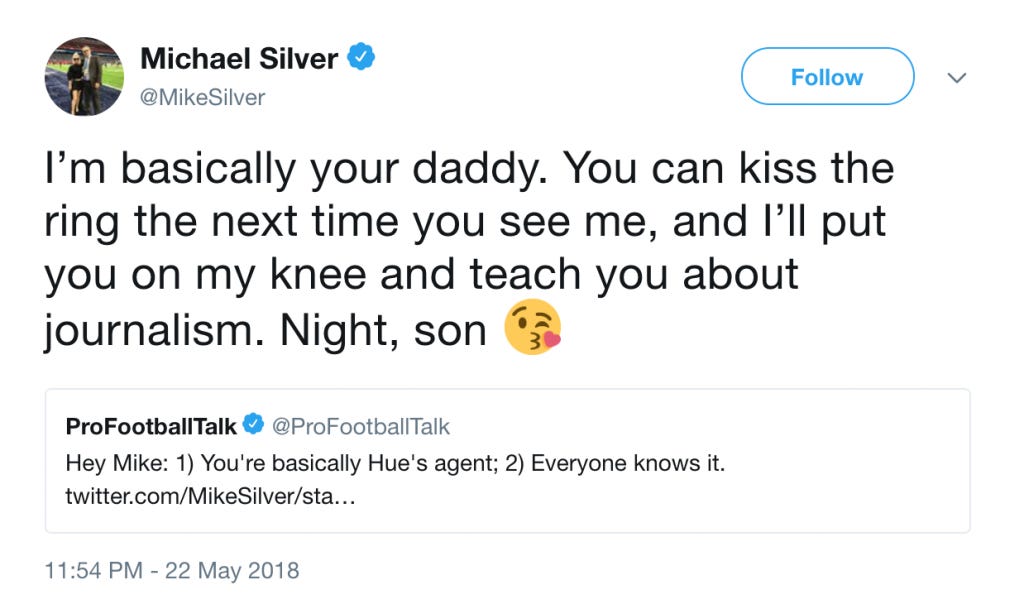 Mike Florio dropped what might have been the dumbest article recently that somehow slipped through my fingers.

I’m a busy man you see as I am (somehow) gainfully employed and have better shit to do then jab up at a hall of fame quarterback about a Madden rating.

Are you telling me Mike Florio, a dude who breaks a little bit of NFL news here and there and is considered by many to be an “insider” took the time to go on his tiny little computer in his itty-bitty (he’s short, you see) West Virginia compound, and actually look up (another short joke) Madden numbers to see if Aaron Rodgers didn’t get the highest rating, then write a god damn article about it with this as the opening line?

“…A certain player with a reputation for being a tad sensitive may not be happy with the number he received.”

I mean you’ve got to be shitting me. Never in human history has another grown (that’s up for debate) man been more painstakingly obsessed with another. How many ridiculous, innocuous, and down right sad attempts has this dweeb made to try to shit on Rodgers?

You can google “Mike Florio Aaron Rodgers” and find articles of similar ineptitude dating back to 2011. We’re creeping up on a decade of dedicated ass-hatery here! It’s pretty clear this guy sucks.

Remember when he tried to say Rodgers was a bad guy because he didn’t sign something for a woman with cancer, but Rodgers actually knows the lady and didn’t see her and has signed tons of stuff for her before, so Florio had to retract his statements, apologize to Rodgers and the woman, and pull his initial article because it was so fucking awful!

Or when he announced that Terry Bradshaw was dead in 2007!

Has anyone actually even been to Florio’s website recently? It looks like it was made in 1998, which is coincidentally the year the Vikings had their best chance to ever win a title but lost in horrific fashion on a soul crushing missed FG.

Boy does that sound familiar.

And another thing, who in the fuck still even plays Madden anymore? When NCAA got the boot (RIP please come back) that was the end of football video games in America. End of story.

Be sure to check out the latest episode of the Loaded Box Podcast as the guys debate their biggest fantasy football positional ranking discrepancies!

Logan Beatty is a featured blogger for the Loaded Box Podcast.  Check out his article archive and find more from the Loaded Box on Twitter & Facebook