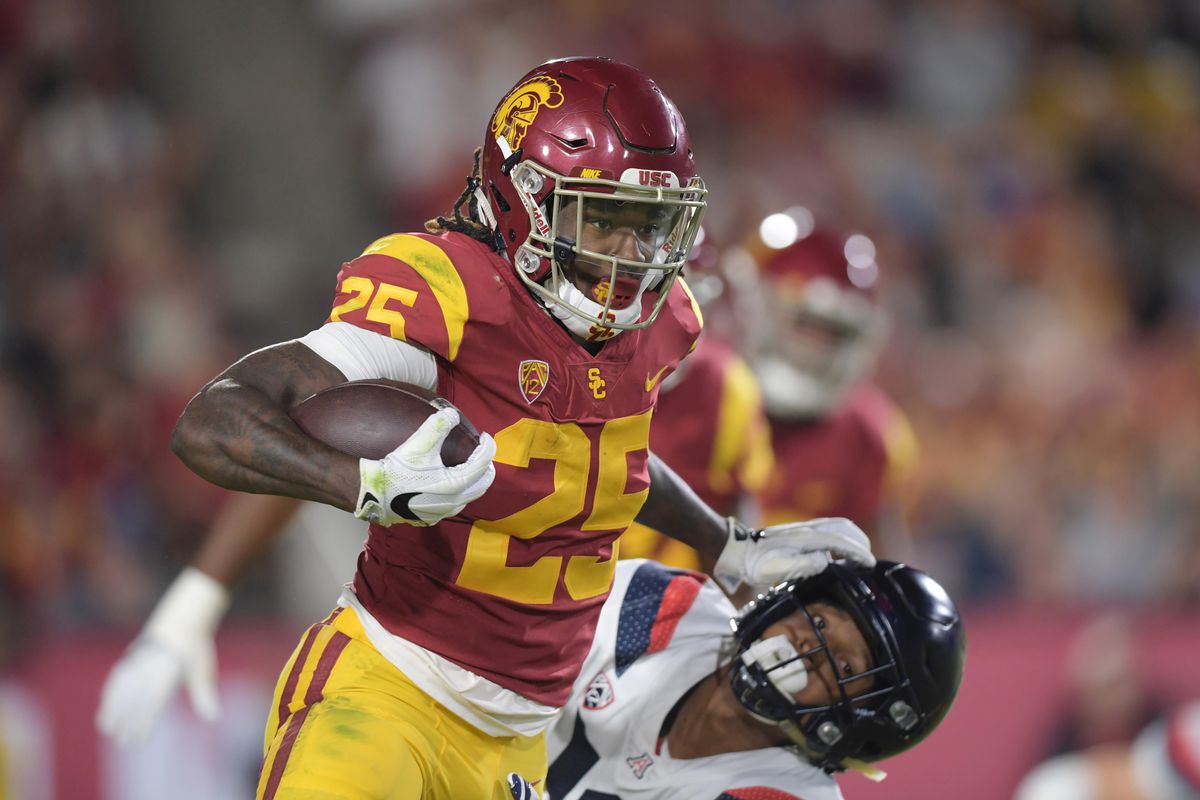 With the emergence of rookie backs in 2017, the fantasy football community has been absolutely buzzing over the rookies this year. We had 4 rookie running backs finish as RB1s in PPR formats last season and given the talent in this year’s draft, I wouldn’t be surprised to see a similar number. Obviously, there is one rookie that is leaps ahead of the rest of them, but there are plenty that have an incredible amount of potential in the NFL.

For those of you who play in dynasty or keeper leagues, pay attention because this will be your blueprint for absolute success in the coming years of your league. For those in redraft, you’ll still find plenty of value in these 5 backs.

If you’re reading this article, chances are you care about fantasy football enough to already know that Barkley has legitimate RB1 potential right out of the gate. In fact, Barkley has been the consensus #1 overall pick in dynasty formats, and a top 10 pick in most other formats, and rightfully so. The dude is as elusive as Shady McCoy in his prime and he’s even got about 25-30 pounds of more muscle.

For those of you on Fantasy Twitter, (for those that aren’t, come around more, we’d love to have you) I’m sure you have seen the absolute ridiculous offers some people have been getting for the 1.01 dynasty draft pick. Some people have gone completely overboard with it (I’ve seen someone trade away Melvin Gordon, Mike Evans, AND a late first round pick for that top rookie pick), but I agree with most of the hype, as I do firmly believe that Barkley will be a true RB1 for many years to come, making him one of the highest sought-after players in dynasty fantasy football history.

And if you happen to have one of the late picks of your first round redraft league, I say pull the trigger on Barkley. The guy ran for 3873 yards with 43 touchdowns and posted 102 receptions for 1195 yards and 8 touchdowns in the air over three years. Granted college ball is significantly easier than the NFL, but those numbers transferred to fantasy would average out to 305 fantasy points per year. That would be good enough to be a top tier RB1 year in and year out.

I know at least half of you just said “ew” in your mind reading that name. I have absolutely no idea why everyone hates on RoJo, but I clearly have the unpopular opinion here. However, RoJo is my #2 rookie running back this year, and you can quote me on that.

Do I think he’s the most gifted and talented runner not named Barkley? No, not really. But he is in the best situation by far. The only running backs that RoJo will battle in training camp is Peyton Barber, Jacquizz Rodgers, and Charles Sims. Barber is not meant to handle a big workload, Rodgers is just not very good, and Sims… he catches better than he runs. I don’t think RoJo will have a problem beating out all 3 of these guys, and at the very least he will receive 2-down work every game.

RoJo will also have a shot to make an early splash in the league, as Tampa Bay could be forced to go run heavy with Jameis Winston out the first 3 weeks of the season. I’m not quite sure why I’m the only one who sees it, but I genuinely believe RoJo could develop into a star in this league, and even has some upper-tier RB2 upside for the 2018 season. The big thing standing in his way, ironically enough, is the offensive line in Tampa Bay. They’re not very good at doing their job. However, there is one thing they have a decent amount of success in; creating opportunity in the outside zone. The more important part? The outside zone is where RoJo thrives.

There aren’t many analysts that agree with me on RoJo, and I guess I can’t blame them. But I see something good about this kid. He has little competition on a team that is down to experiment offensively, and he’s got something to prove. He should make an immediate impact.

Guice IS the second most talented running back in the 2018 draft class. But, he slipped in the draft due to off-field issues, which is ALWAYS cause for concern in the NFL today. That’s my first reason why I’m personally hesitant about drafting Guice.

My second reason for being concerned is Chris Thompson. For those of you who don’t know Thompson, he was Washington’s catching back last season, and before going down with an injury, was an RB1 in fantasy football. I call him a catching back rather than a “3rd down back” because he played his fair share of 1st and 2nd downs each game. If Thompson wasn’t around, Guice would absolutely be my #2 guy on this list.

Guice immediately blows past Samaje Perine on the depth chart and will most definitely be the “two-down” back in most games. Though for the time being, that’s really all he’ll be. The good news is that Washington has a decent offensive line and should call on their runners fairly often.

Even with Thompson around, Guice should be able to sneak into the RB2 conversation. Plus, if Thompson should miss any time this season, Guice could tear it up out there. He’s not a great blocker, he’s not a great receiver, but damn that kid can run. If they call his number early and often, I see absolutely no reason why this guy can’t be a thousand yard rusher in his rookie season.

Ranking Penny as my #4 running back is probably a shock to most of you. However, the only thing he’s really got going for him in Seattle is the lack of real competition. Everything else is sketchy at best.

But before I explain myself on that, I want to bring up the fact that there is a lot of talk that Penny could be this season’s Kareem Hunt. While I do like the sound of that, let’s not forget that most of Hunt’s fantasy points came from his first 3-4 games of the season. He then faded away as defenses learned that he was an above-average running back at best (That’s right I said it, Hunt is FAR from elite). Penny also isn’t an accomplished receiver, which is an area that Hunt had thrived in. In other words, I’m not really taking the comparison as a deal-maker.

As I was saying before, there’s not much competition, as Seattle’s other running backs really have no shot at the starting job. Penny was selected in the first round and is clearly better than the current running backs “ahead” of him in the roster. My biggest concern about Penny being immediately effective is because of the situation he’s in. Seattle’s offensive line is not very good. Seattle has also lost a few key components of their defense. I have a strong feeling that Seattle will be giving up a lot more points than they are used to, forcing the passing game (Doug Baldwin owners will love this) to be significantly more prominent than in past years. Until Penny can solidify himself a spot in the passing game, his ceiling and even his floor will be moderate at best.

Penny has been going as either the 2nd or 3rd player off the boards in dynasty leagues and has been going in the early 4th round in most redraft leagues. I think the dude is very talented, but I think he landed in a tough spot. Penny will not come close to reaching his potential in 2018, and he should be considered more of a dynasty stash or backup runner on your roster for 2018.

Yeah, you read that right. Surprised? You shouldn’t be. Fantasy football is all about the opportunity, and not many RBs have as much opportunity as Hines has. Hines is sitting in Indianapolis, a football team absolutely dying to do something positive offensively, and with the return of Andrew Luck, they could do just that.

Hines actually started his college career as a wide receiver, but don’t let that fact fool you: he’s actually a pretty good running back. Dude’s got a lot of potential, is fast as all hell, and obviously has the hands that are highly coveted in the NFL. A good pass-catching running back could be a great asset to Luck and the Colts, and Hines, if given the green light, could prove to be a Chris Thompson type of player in his rookie year.

He also really only has to beat out Marlon Mack, which even if he fails to do so (which he should do eventually), Hines should still emerge as their 3rd down back. Those in PPR formats know just how valuable some 3rd down running backs can be to a fantasy squad. He’s a late round flier in redraft leagues and should be pretty easy to snag in the late rounds, as he’s not very well-known in the general fantasy community just yet. Don’t be surprised if he posts 1,000 yards from scrimmage with a lot of added receptions to boot.

And there you have it, fantasy fans. Which ones surprised you? Which ones do you disagree with? Feel free to reach out and let me know!

Be sure to check out the latest episode of the Loaded Box Podcast as the guys discuss sleepers and busts in the NFC.