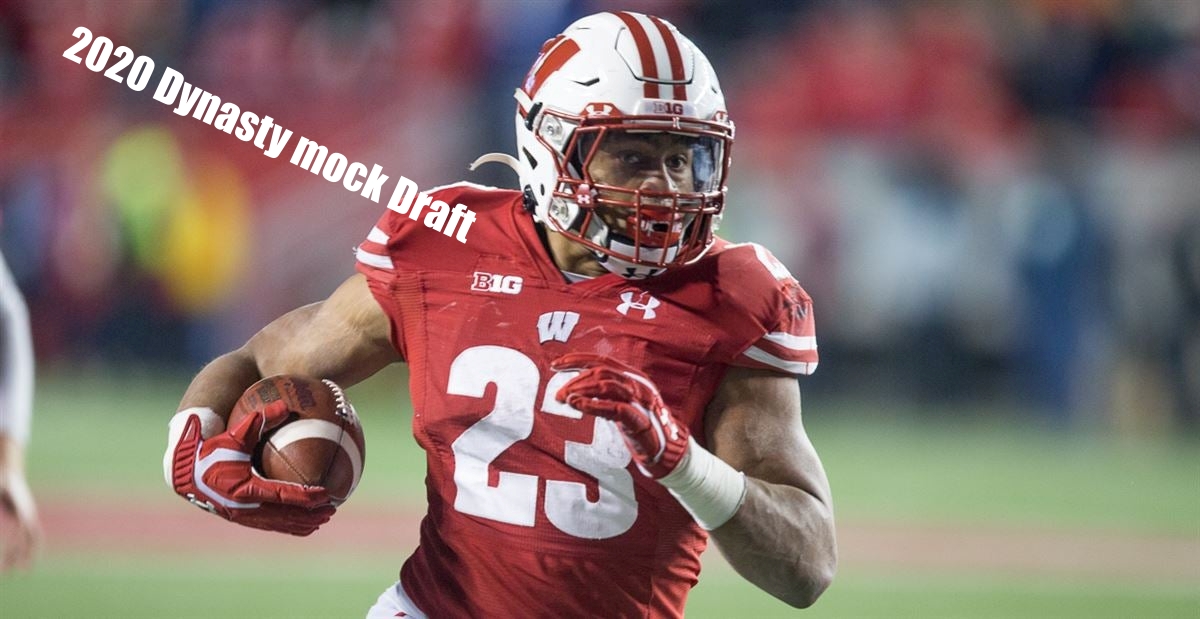 Now this is all based upon not knowing where players will go during free agency or where the current crop of rookies will be drafted. We basically have until the end of April to project where these players may be drafted, and then by Sunday, April 26th, the whole landscape likely changes if player “X” went to team “X” instead of player “Y”.

That’s what makes this fun as we get prepared to get through winter and help get you ready for the 2020 fantasy season.

For today, just because I can’t wait to do it, I am going to do a first-round only rookie draft. No super flex, just standard.

So here we go!

With an unbelievable three-year college career, Taylor has been tearing it up since the first carry he took with the Badgers. His elusiveness, footwork and power will and should be enough to make scouts drool over him. Taylor is up there with fellow Badgers’ running backs Melvin Gordon and James White – just a solid combination of the two of them.

It was hard to choose who I wanted between picks 1.01 and 1.02 as I have these players like a beer sip apart (that’s pretty close!). He’s just as complete of a back as Taylor, and can break tackles and ankles similar to Taylor, but is just a little bit behind in my books. I won’t argue with you if you want him as your 1.01 as he definitely has the ability to hang with some of the greats that are already in the league today.

I will not let Dobbins fall any further than #3 as he has the skillset and capabilities to compete for the RB1 spot in the 2020 rookie running back class. His vision, speed, patience and pass protection are already remarkable and I see him with the resemblance of that of Saquon Barkley. The Big 10 just seems to produce RB1’s year in and year out – Dobbins will be able to walk into a three-down roll right away.

The top receiver in my books who looks like he’ll be a steal no matter where he goes in your 2020 rookie draft. He’s got the skills to be the next DeAndre Hopkins, if not better. I mean, just look how he runs past my Michigan Wolverines on this play in the Citrus Bowl:

Yeah, he’s that good, and I would be excited to get him on any, and I mean it, any team in the NFL. If I’m good at running back on my dynasty team, I wouldn’t mind taking him at 1.01.

This wide receiver class is good. Like really good. Just look how he tracks the deep ball from Jalen Hurts:

He is probably the best deep-ball tracker coming out of college, and I would love to see him get paired back up with Kyler Murray. People may say that he’ll struggle at the next level, but with the talent he possesses, I’ll gladly take him here.

I like Etienne nearly as much as everyone mentioned above as this running back class is super deep. The way he runs and catches the ball is something to drool over. Check it out:

Hello Jamaal Charles 2.0. Could you imagine if he went to the Chiefs……

He has the ability to win you your fantasy week with one big play week in and week out.

In a super flex, he is easily the 1.01. How many quarterbacks do you know that can through seven touchdowns against the Oklahoma Sooners in the College Football Playoff…… in the first half? Yeah, I don’t see any either.

He is my top quarterback here and for the…… Bengals? Yes, he will be solid for years to come.

No matter how you look at it, he’s the 1A to Jeudy. His speed is to die for and reliable hands to be up there with Michael Thomas. He’ll be fun to watch and you should be happy to get him here this late in the draft.

Yeah, he’s that good. It’s crazy too to see three Alabama players go in the first round.

Three years in an up-and-down offense didn’t put Akers in the spotlight like it should have, but his 231 carries for 1,144 yards and 30 receptions for 225 yards to go along with 18 total touchdowns is nothing to look away from. Akers upside is through the roof as he has similar traits to Dalvin Cook. It will just take the right team to help him get to that level.

As a runner, he is a solid first- and second-down back. He’s a reliable runner that can take carry after carry. His vision to see space is great.

His pass catching needs some work? I don’t see that like others do out there in the dynasty community. He would be a perfect fit in a committee backfield, which most teams are going to.

I wouldn’t be surprised to see him fall in fantasy drafts, but if you can get him at 1.11, you have a possible diamond in the rough.

Here’s the wide receiver who tied both DeAndre Hopkins and Sammy Watkins in touchdowns (27) at Clemson. His jump from the 2018 season to the 2019 season was one that was needed for him. Scouts may be a little down on him as he played as an outside receiver who knows a limited route tree – sound familiar to a 2019 prospect that’s playing awesome in Seattle now? Don’t sleep on this guy as he could easily move up dynasty draft boards, especially if he lands with a team like the Eagles or Bills.

Now, players have till January 20th to declare. Could the top 12 change after that? Maybe, only time will tell.

Any players you’re surprised about? Players missing? Hit me up in the comments below or find me on twitter @ryanminer_FFB